Lucélia Glória will be representing Portugal in Abu Dhabi in 2019 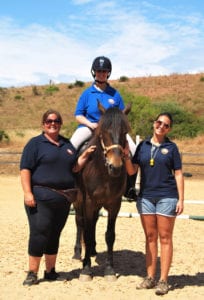 When Quinta do Paraíso Alto (QPA) Riding Centre and the Bensafrim non-profit association Riding for the Disabled Barlavento began hosting therapeutic riding sessions for local disabled people in 2007, little did they know that this charitable adventure would eventually take them to the Special Olympics World Games. But the credit for such an incredible accomplishment goes not only to both entities, but especially to Lucélia Glória, the 30-year old rider from NECI (Núcleo de Educação da Criança Inadaptada) who will be representing Portugal in Abu Dhabi in March 2019.
Lucélia is one of the 20 riders from local associations, such as NECI, Casa de Santo Amaro and Algoz school, who enjoy the opportunity to take part in therapeutic horse riding sessions three times a week at the QPA premises in Bensafrim. Initially afraid of horses when she began riding eight years ago, Lucélia has blossomed into a confident rider who went on to conquer the gold medal in the national championships in her level in 2017 and 2018. Now, along with QPA’s manager and instructor Sue Wilson and physiotherapist Ângela Mesquita, she was chosen by the Portuguese Olympic Committee to represent Portugal. “We’ve been training with the national team once a month in Setúbal and we’re also hoping to do a estágio [traineeship] in the Algarve with them in February before we go to Abu Dhabi,” said Sue Wilson. Asked about her expectations for the competition, she is adamant: “In our eyes, she will always do well. It’s hard work, but it’s so worth it to make that little bit of difference in their lives.”