Formula 1 icon Lewis Hamilton was “totally blown away” by a giant painting in his honour that was painted onto a private football pitch in Mexilhoeira Grande, Portimão, by Algarve street artist HUARIU.

The British racing legend, who last weekend celebrated his record 92nd F1 career win at the Algarve International Racetrack, shared a video of the massive work of art on his Instagram page, which, at the time of writing, had already been viewed by nearly 850,000 people. 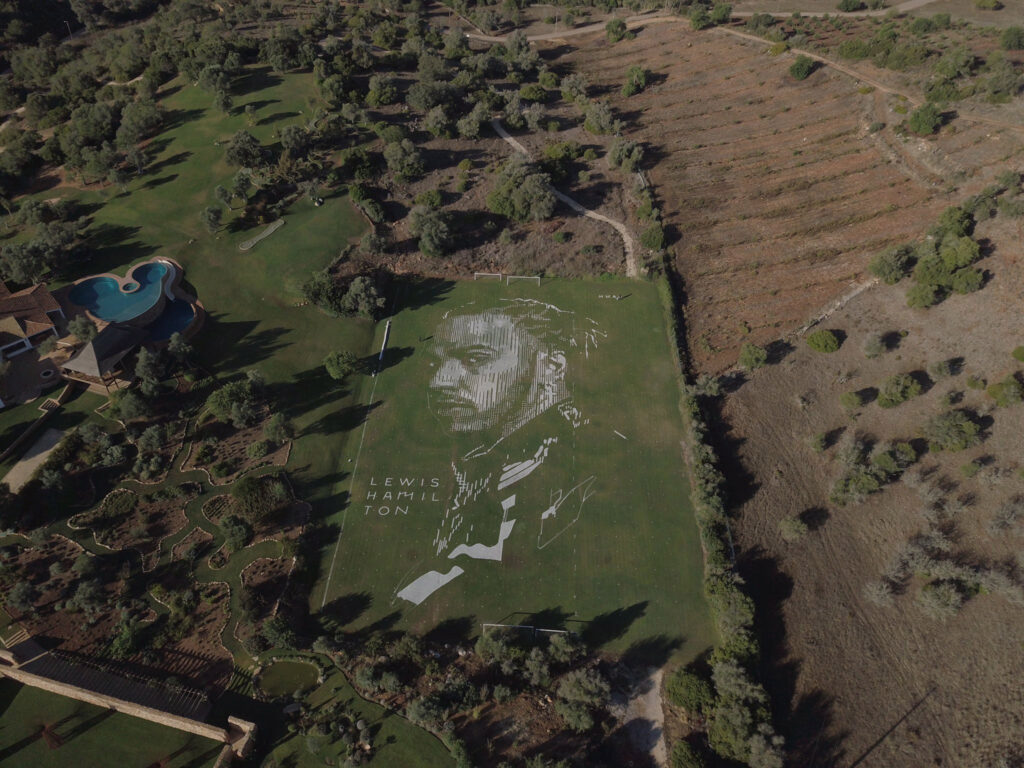 Speaking to the Resident, the 28-year-old from Lagoa was nearly speechless. “To be honest, I think I’m still in shock … I can’t really believe it,” he told us. “I never expected it to have the impact that it had,” HUARIU said.

The idea was pitched to him by former clients who own the football pitch and are “huge F1 fans”. They initially wanted him to simply write “Go Lewis” on the pitch, but he had something bolder in mind. “I presented them with two ideas. The one they picked was the one I ended up painting,” he told us.

As he wrote on his Facebook page: “1,000 litres of paint, 5500m², eight days and a lot of sweat is what it took to materialise this mammoth of a painting.” The process started on October 17 and was completed on Sunday (October 25), the day of the F1 GP.

But there were times when HUARIU thought it would be impossible. “We faced one full day of rain and another day with periods of rain. Thankfully, the paint survived it,” he said, adding that he wouldn’t have been able to complete the painting without the help of his girlfriend and two friends.

Despite his worries, the painting was completed just in time to celebrate Hamilton’s historic win in Portimão.

While the widespread attention he is receiving may be a first for HUARIU, this wasn’t his first major artistic project. He discovered the world of graffiti at the age of nine but eventually “lost interest” before rekindling his artistic passion again at 21. Now a full-time artist, Huariu has already made a name for himself in Portugal’s urban art scene despite his tender age.

You can find out more about him on his website (www.huariu.com) or by following his social media pages (@Huariu).