As we all know, the Algarve is a trendy destination for foreign visitors and investors, and thankfully, Dutch entrepreneur Erik de Vlieger fell in love with the region of Lagoa many years ago. Better known for his partnership with Carvoeiro Clube, where alongside his Swiss friend and business partner, Andreas Stocker, they have been rejuvenating many older properties along the coast and even developing two new resorts in Carvoeiro, Quinta do Algarvio and Vale de Milho Village.
We met with Erik to talk about his new project Atrium Lagoa that will see the long-abandoned shell of a building, at the entrance to the town, transformed into a bright, light, stylish housing solution. “I love urban developments, they get my creativity flowing and that’s actually where I started out, back in Amsterdam,” Erik told us.
With 52 apartments ranging from one to five bedrooms, including three palatial penthouses with air conditioning and semi-equipped kitchens and prices initially starting at €105,000, it’s no surprise that at the time of going to print, they had already sold 25% of the apartments and only have units from €120,000 to €230,000 in stock at this early, pre-build stage. There will also be 71 underground car parking spaces over two levels, 54 storage rooms along with 13 retail areas, that are, again, selling straight off plan. 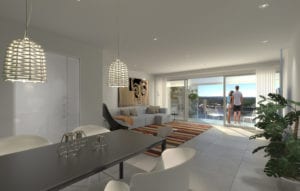 Centrally located both for local transport links via the nearby bus station and straight onto the national roads, connecting residents to everywhere else in Algarve, Lisbon, Seville and more in no time at all. The design of Atrium Lagoa will blend efficiency and an urban-chic style, incorporating energy-efficient solutions, innovative outdoor features with more than 2,100sqm of gardens, balconies and terraces that benefit from its south-facing exposure. The prices are very attractive for both local and foreign residents and are refreshingly realistic and accessible in the buoyant property bubble that Portugal has been experiencing for the past couple of years. That’s what urban regeneration should be all about, not pushing out young and local people but instead offering them a place to build their lives.
“This is a new approach to urban life, with open living spaces and natural light. Atrium Lagoa should be ready to welcome its first residents in early 2020,” Erik told us. “The project is expected to start being built late 2018. The estimated period will vary between 18 and 24 months and the total area will cover almost 12,000sqm.”
He joked that this abandoned structure had “irritated” him for the past 12 years; whenever he drove past it, he thought it was like an ugly set of front teeth in an otherwise pretty smile. Finally, enough was enough, and he went to Banco Montepio in 2010 to see how much they wanted for it. Unfortunately, because the construction company was crippled by the recession, the asking price was very high. In 2017, however, the bank came to him and the deal was done. A self-described urban developer, the Dutch entrepreneur says he has never worked so hard in his life: “The bureaucracy in Portugal really is out of this world.”
Similarly to the works he is carrying out on the waterfront area in Portimão, he wants Atrium to set an example, leave a mark and boost the local economy. He believes that it’s important to employ local people, and has therefore chosen local company Simão & Martins to complete the construction of the building. Bearing in mind that the existing structure had been abandoned for many years, it was vitally important to run a variety of quality and safety inspections to ensure that everything meets the current standards, and the result came back positive.
Architect João Carriço, of Studio Arte, in Portimão, was responsible for the design, which was based on sustainability, simplicity, transparency and open spaces. “On the top floor, the apartments will have very generous dimensions,” he said. “The five-bedroom units will have about 250sqm, the four-bedrooms around 200sqm and the three-bedrooms close to 190sqm.” According to the architect, the underground parking spaces will feature electric chargers for cars of the future, and the roof will be created as an urban garden and a lounge area, with an accessible terrace with a play area, accessible by all residents. “The entire building has been designed with the intention of promoting fluid circulation between spaces.”

Arnold Aarsen, head of Studio Arte, stated that the entire Atrium Lagoa is characterised by a concept that involves elements of nature and natural light: “We realise that Portuguese homes have many blinds or curtains to protect them from the sun, but we like a more transparent building so we will use different solutions.” The goal, he says, is for residents to always have natural light in their home, and the balcony will be integrated into the living room. The rear area will also boast a mini-garden, with water, natural light and a vertical wall with plants. “We’ve also studied the position of the air conditioner and machinery to try and keep the building as clean as possible,” he explains. “Within this complex, we will have a communal laundry room as well as a condominium room and a small gym.” 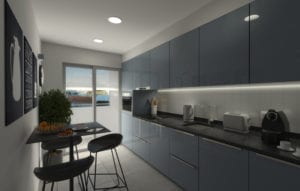 Considering the issue of sustainability, care will be taken to install solar panels and a heat pump along with both thermal and acoustic elements being addressed. Perforated panels will be placed to break up the facade of the building with some ornamental notes, but at the same time creating filters that allow the balconies to have more shadows. The main focus here is light, sustainability and quality. Studio Arte believes these combinations will ultimately lead to a healthy living environment.
The project promises to give Lagoa her smile back, and Erik de Vlieger is excited about the future: “I see a bright future in the Algarve, I’m happy here. However, as an urban developer, my speciality is to improve the look of cities, even though I’m a businessman and not a philanthropist,” he joked.