Love in a bottle

Home » Features » Love in a bottle 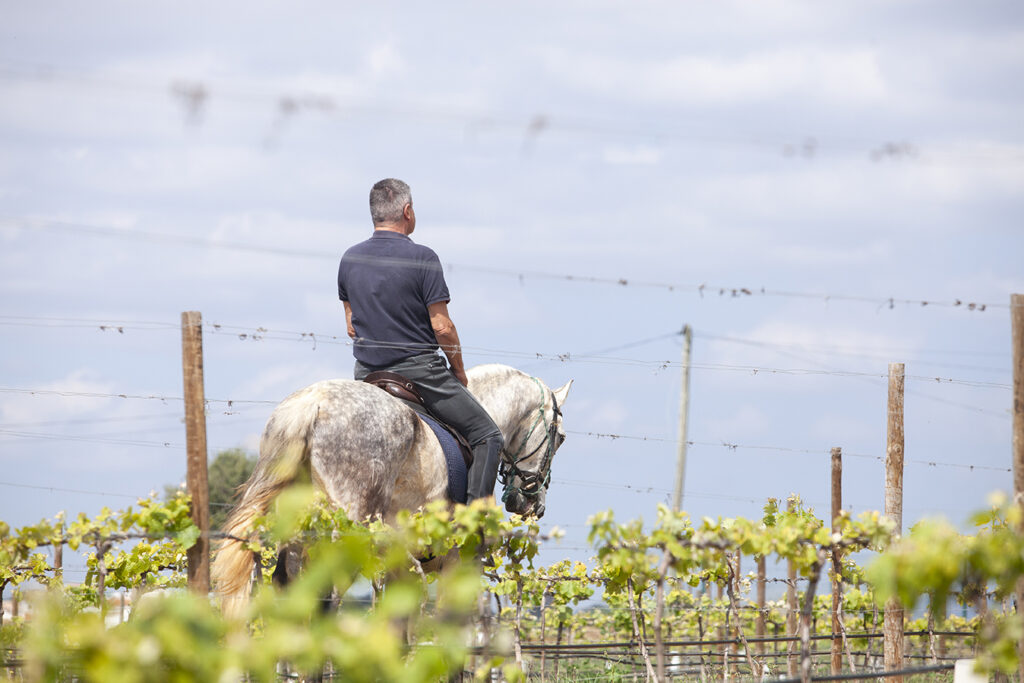 Inside met the charming owner of Quinta dos Capinhas, Inês, who showed us around and told us about the neighbouring properties and the family’s evolution into a beautiful country vineyard. We were welcomed by Inês and the family’s dogs, who joined us on our walk around the vast 30-hectare estate. The property goes as far as the eye can see from some of the valleys and terraces, and is rich in local flora and fauna that are complementary to the general wellbeing of the vineyard. “In our farm, besides wine, we keep the native trees and plant others, typical in the area, like carob, olive, cork, almond and pomegranate trees, among others,” Inês explained. “You can see, we are surrounded by wild vegetation and small wild animals, from the bearish boar or clumsy cranes to the most delicate bee-eater or chameleon.” 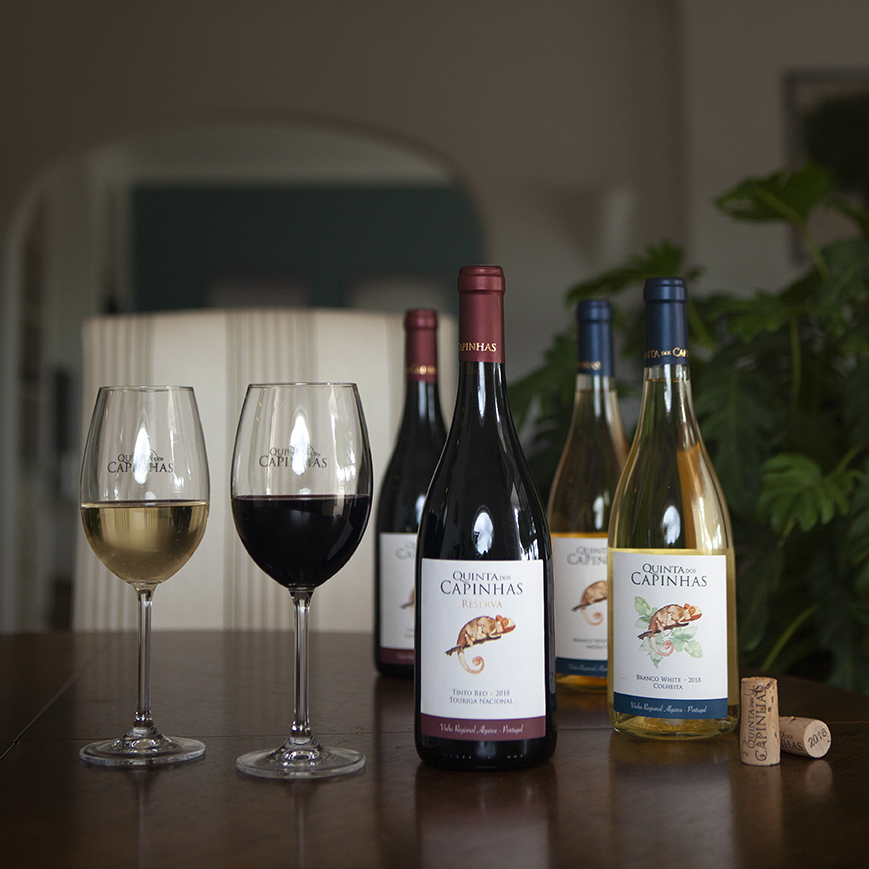 Inês met her German husband, Horst, in 2012 when they were neighbours, walking their dogs in the countryside. Horst had a few projects in the area and, soon after meeting, the pair began working together. A little time passed, and their relationship developed further, and now in 2020, they have a beautiful daughter, Maria. When the couple got together, they thought it would be a cute idea to plant some vines in front of their home as the leaves are green in the summer and they love wine. As often happens, those tiny vines take a lot of work to make them into wine, so they decided to push forward and make the work pay off. “The wine is named after my family name in tribute. My mother’s family were winemakers from the centre of Portugal, and my husband has been a wine lover, for many years, so I guess it was only a matter of time,” Inês joked. 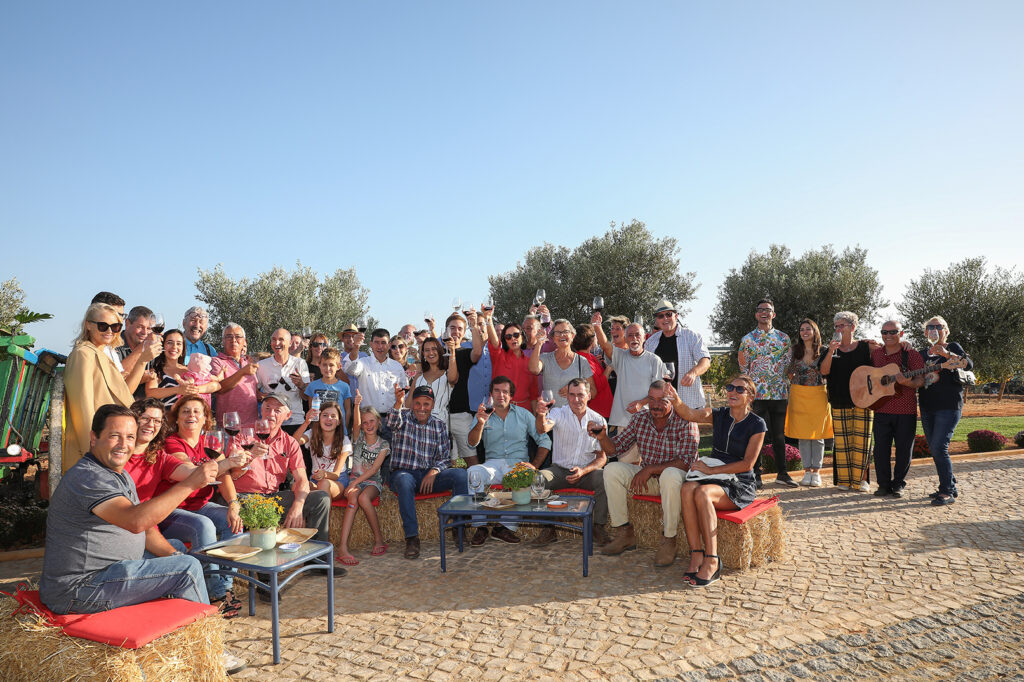 So, it would be fair to say that Quinta dos Capinhas was born from a personal taste for wine, wildlife appreciation, sea breezes and a love story. Only 2.5km from the Atlantic, the valleys, trees and air play a significant role in creating the estate’s wine varieties. In the mid-1970s, after the Carnation revolution, most farming in the area was left to become wild with the coastal tourism bringing much easier financial rewards. After purchasing the plot directly in front of their Quinta, the couple received the relevant licenses and extended their vineyard to cover five hectares, intending on expand it further soon. Something rather unusual about this Quinta is that they do their harvesting in the evening, known as Moon Harvest. Most southern producers tend to harvest during the day, and I must say, I think that moon harvest makes a lot of sense having done a few day time harvests in the sweltering heat. 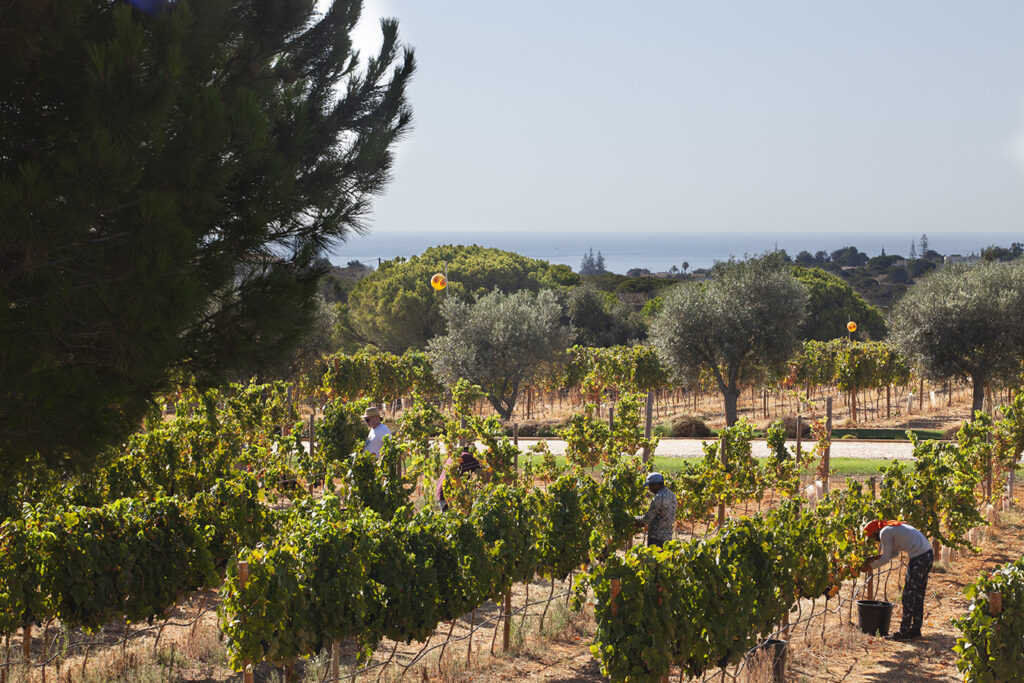 As for current grape varieties, there are four whites and four reds. Amongst the whites there’s Antão Vaz, a firm, full-bodied, well-structured wine with vibrant aromas. They make a single variety and also use it for their blends. There’s also the Arinto, predominantly from the Vinho Verde region with refreshing acidity, good mineral quality and gentle fruit flavours, which makes it perfect for improving their white blends. The Chardonnay, originally a grape from the Burgundy area in France, has become the most popular white variety worldwide. “We use it to blend with our other varieties,” says Inês. Finally, the Verdelho is mostly associated with the island of Madeira. Quinta dos Capinhas is one of a few growers cultivating this grape in Algarve. It makes a rich and aromatic dry white wine with good acidity.

As for the reds, there’s Alfrocheiro, from the Dão region. This grape has a good balance of tannins, alcohol and acidity, and gives an attractive berry fruit reminiscent. It’s well suited for the climate of the land and retains good acidity. Meanwhile, the Alicante Bouschet produces intense, deeply coloured wine that is mixed with other grapes for volume, structure and good aging characteristics. The classic Cabernet Sauvignon, like the Chardonnay, comes from Bordeaux and has conquered the world. Deep colour, good tannin structure, slight acidity and aromas of berries and wood. Back to national varieties, the Touriga Nacional from Bairrada “needs a lot of sun to get ready for harvesting before the autumn rains. When grapes ripen well in dry years, they produce a rich but lean and well-structured wine that gains softness and elegance with age”, says the winemaker. The estate also produces two sweet varieties, Moscatel Graúdo and Moscatel Roxo. These varieties for liqueur wines are perfectly suited for Algarve conditions. They produce sweet wines in the tradition of Lagoa. 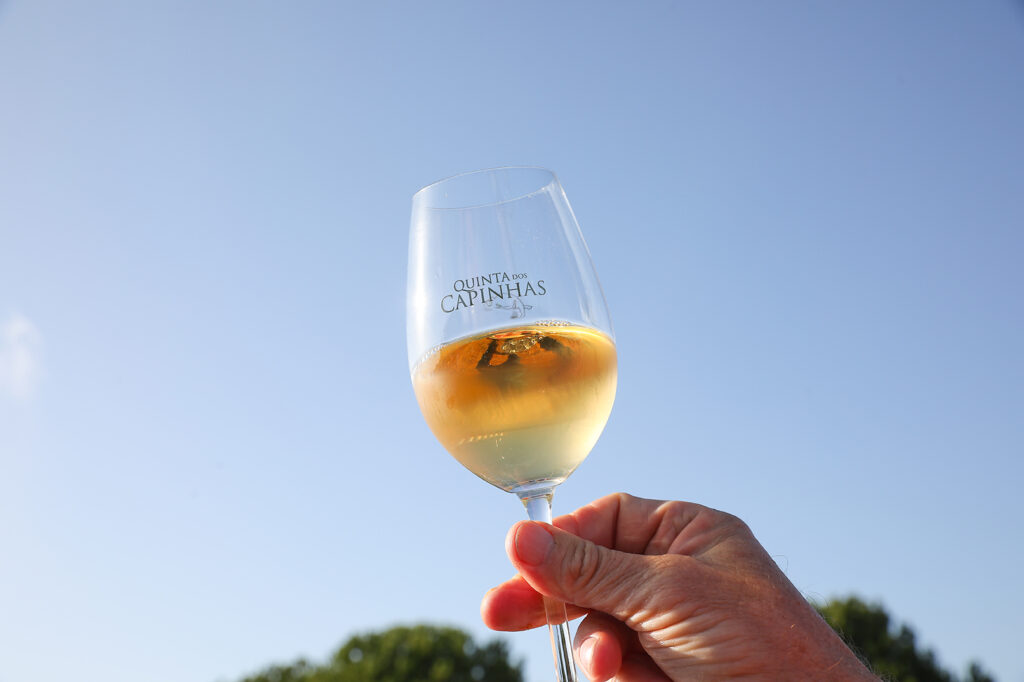 The vineyard is set partly on terraces along the hill slopes on shell and clay-limestone, partly alongside riverbeds on sandy soil. These soils lend themselves well to diversity and allow the vineyards to successfully grow many varieties of grapes, both indigenous and imported. The family make their wines in the Adega Cooperativa in Lagoa with winemaker João Marques. At the moment, they have a lovely selection of red and white wines with one blend and one monocast of the white and reds, two red Reservas and one rosé. This year will bring the first Alicante Bouschet Monocast for the vineyard, and, when they extend the vineyard, they will plant the native Negra Mole, giving them an outstanding balance within their range.

Spotted through the land are three, typical Algarvean cottages that have been lovingly restored and are now available for rural tourism. Inês pointed them out and told us: “In our farm, we have three houses available for holiday rental: Casa da Pinga (sleeps eight), Casa da Avó (sleeps four) and Casa do Pónei (Sleeps four). With Senhora da Rocha beach only 2km away and some of the Algarve’s most beautiful beaches less than 10 minutes by car, the cottages offer the perfect retreat for those wishing to sample the stillness of the countryside whilst being well connected to all modern amenities. The nearest town is Porches, which is well known for its wine and pottery production, making it the perfect spot for the lovely Quinta dos Capinhas to grow whilst reinstating the time-honoured, authentic traditions of the area.