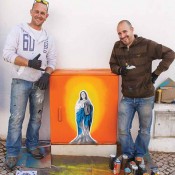 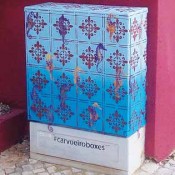 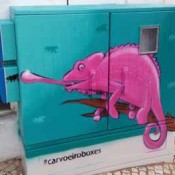 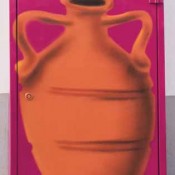 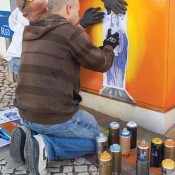 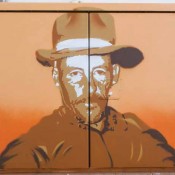 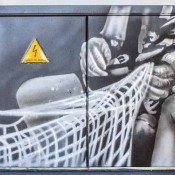 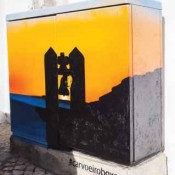 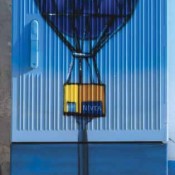 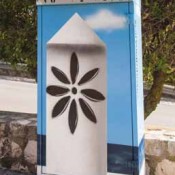 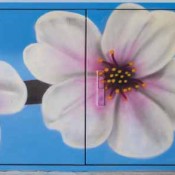 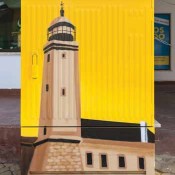 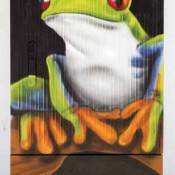 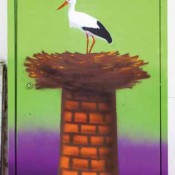 As you enter the outer limits of Praia do Carvoeiro, you may notice a brightly painted electricity box to your left, depicting a typical Algarve chimney, with the obligatory bright blue sky as a background. This is the first of 55 electricity boxes (phase one) found along Rua do Barranco and Rua dos Pescadores and the brainchild of local artists Phil Francis and Hélder José.

Phil, who is affectionately known as “Phil da Bife”, has lived in Carvoeiro for 27 years and is currently training to become a tattoo artist in a local parlour. Phil stumbled across a similar project when visiting the city of Oporto, in 2014, where he was impressed by how the brightly-coloured boxes provided a stark contrast to the old buildings. Upon his return, he suggested to his friend Hélder José that they could do something similar in Carvoeiro. Instantly sold on the idea, Hélder, aka Bamby, runs his own company specialising in art décor and graphic design and was also involved in creating the colourful mural near the Casa Manuel Teixeira Gomes, in Portimão. The two artists approached Carvoeiro parish council at the end of 2014. The mayor was so enthusiastic about their idea that it was practically given the go-ahead on the spot, with funds provided by the parish and Lagoa Municipal Council.

The last hurdle they faced was obtaining permission from the owner of the boxes – the local electricity authority. Permission was eventually granted in 2015, when Phil and Hélder could finally get to work on transforming the boxes. Originally grey and often vandalised or neglected, the electricity boxes are now adorned with pictures of the local area and people who have left their mark here.

The theme of the project is ‘Vida Algarvia’ (Algarve Life) and encompasses a range of subjects, including views, architecture, flora and fauna, religious artefacts, decorative pieces and local characters. Some of the paintings are also based on stunning photos of Carvoeiro taken from ‘Ainda, e Sempre, o Mar’ (Now, and Always, the Sea), a book by local researcher João Vasco Reis.

Portraits of fishermen, such as “João Peludo” (Hairy João), or other charismatic locals, such as “Aunt Olympia”, also sourced from the book, can be admired on the boxes as you walk around the village. Phil and Hélder would love to know who these old characters are.

“I was a bit concerned that some of the older locals might not like the idea, but the feedback has been very positive,” Phil tells us. Bamby is also delighted by the success of the initiative. “Better than being plastered with political posters, the boxes become works of art for everyone to admire,” he enthuses.

The artists also chose some nostalgic images of the town. “The Nivea balloon was an old meeting point on Carvoeiro beach; it brings back lots of memories,” Phil recalls.

Phil tells us how they made a stencil of the Portuguese Scouts logo and customised a tile design, which they then embellished with sea horses, beside the beach. This is one of Phil’s favourites and a fitting tribute to João Vasco Reis, the leader of the local scout troop, of which his daughters are members.

Phase 2 was approved early 2016 and involves the remaining 37 electricity boxes within the parish limits.

Photos of the artwork can also be found on social networks under the hashtag #carvoeiroboxes.