Bon Bon is back

Home » Features » Bon Bon is back

Getting ready to open Bon Bon for this season, owner Nuno Diogo was faced with the challenge of finding another chef and team. His last chef, Louis Anjos, moved on to pastures new at the beginning of the year but there was no shortage of candidates and he settled on José Lopes, a 31-year-old who appears to have the experience and the team behind him needed to keep Bon Bon at the top of its game. There is a refreshing confidence to the new chef’s cooking and a clear focus on the cuisine and ingredients of the Algarve.

The lunch menu offers an excellent introduction to the restaurant at a more accessible price, with three courses at €45, four at €59 and five at €70, but even the three courses end up at six or seven if we include amuse bouche appetizers, the bread course, pre-dessert and petit fours. But it is the dinner menu that really showcases the work of the kitchen with five courses (or Moments as they call them) at €115 or seven at €140, all prices without wine.

Two of the standout dishes on the lunch that show a strong connection to the Algarve are carabineiro(scarlet prawn) with flavours of Caldo Verde soup and an outstanding rendition of Algarve pork and clams. The current dinner menu is themed on the ocean and is presented at the table like a message in a bottle. One of the most impressive dishes, served as a transition between the fish and meat courses, is one that tricks the palate; a rack of sole is served to resemble a tiny rack of meat on the paired bones with a pork belly demi-glace, a foam flavoured with smoked pork, textures of cauliflower and pickled seaweed. 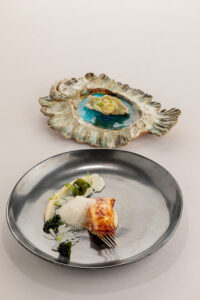 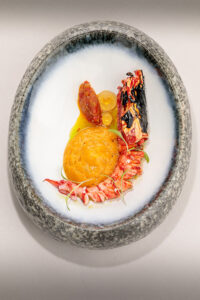 There is no doubt that the standard of cooking at Bon Bon today is as worthy of a Michelin star as ever. Chef José Lopes brings a new style of fine dining to the restaurant, whilst the familiar face of Nuno Diogo, as host and sommelier, gives this outstanding little restaurant the continuity and unwavering standards that should make sure Carvoeiro’s only Michelin star remains firmly in place.