Herdade Barranco do Vale is reviving an old family tradition 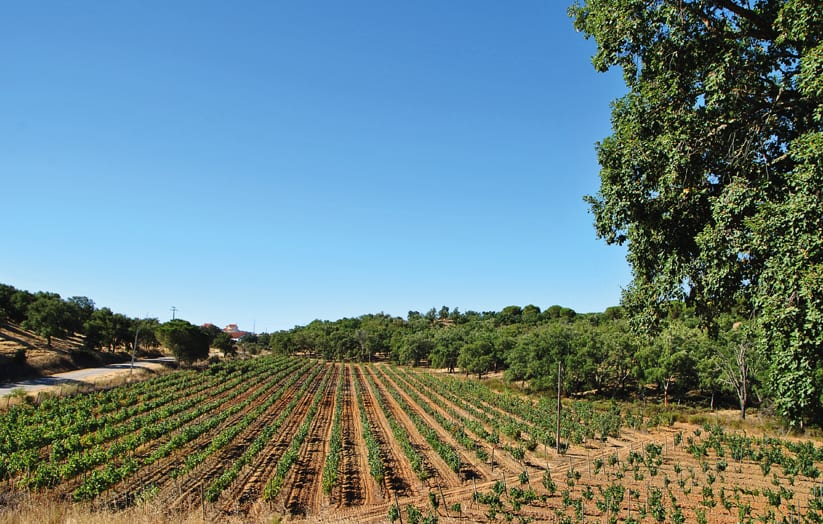 Dear Grandfather, the farm is still beautiful. The cork oaks you have planted are strong and healthy, the olive trees large and firm and the “medronhos” are simply divine. The old vineyard was carefully cultivated, and the planted area expanded. The grapes from which this wine was made have been carefully handled and selected, and the production carried out to the highest standards. The wine matured 20 months before bottling. With love, Ana Luísa.

This text appears on the label of the wines of the Herdade do Barranco do Vale, in the Sítio dos Campilhos near São Bartolomeu de Messines — a small tribute to Ana Matias Chaves’ grandfather, Ramiro Graça Cabrita, who bought the farm in the late 1960s and planted the first vines.
When Ana talks about her grandfather, her eyes shine. She proudly reports that he was far ahead of his time and a true entrepreneur. On the 100-hectare property with carob, almond, olive and medronho trees as well as cork oaks, he had four reservoirs built and even underground pipes laid for the irrigation of the entire estate. “We are extremely grateful to him for this today,” Ana says. The buildings, which used to serve as stables for the animals and the storage of agricultural produce, give an idea of the size of the property. The greatest tribute to Ana’s grandfather, however, is that she and her family continued his life’s work and created the wine Herdade Barranco do Vale. 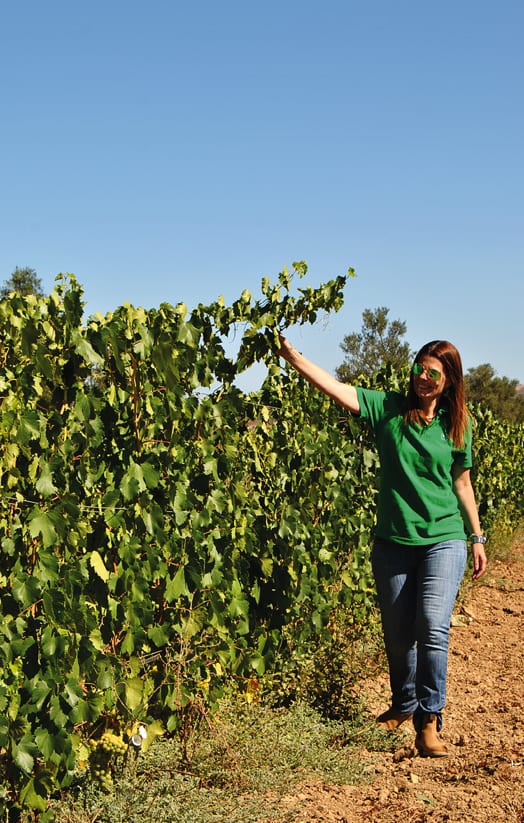 After Ramiro Cabrita died in the early 1990s, his daughter and her husband took over the estate. Although they lived in Lisbon, they always looked after the rights and took care of the harvests and have now entered the family business. Both Ana and her parents can always rely on the support of Fernando, who was hired by Ramiro as a young man and has been working on the estate for over 40 years.
Ana’s time is split, and she has to commute regularly between Lisbon and the Algarve, yet she is happier than ever. She doesn’t miss her job in the marketing department of a large company in Lisbon. “I loved my work, but I love this estate and wine production even more,” she says with a smile as we walk through the vines surrounded by cork oaks. In addition to Negra Mole, the Algarve’s most traditional grape variety, which was planted by her grandfather in the 1960s, Aragonez, Castelão and, more recently, Alvarinho, Antão Vaz, Arinto, Chardonnay, Sauvignon Blanc and Viognier also thrive in the vineyard. Apart from the Rosé and four red wines, two genuine and two Cuvées, soon they also want to produce white wine. Ana is very proud of the Barranco do Vale Rosé made from Negra Mole: “Fresh, floral and fruity, not too sweet, not too dry, with a long, elegant finish,” she says. 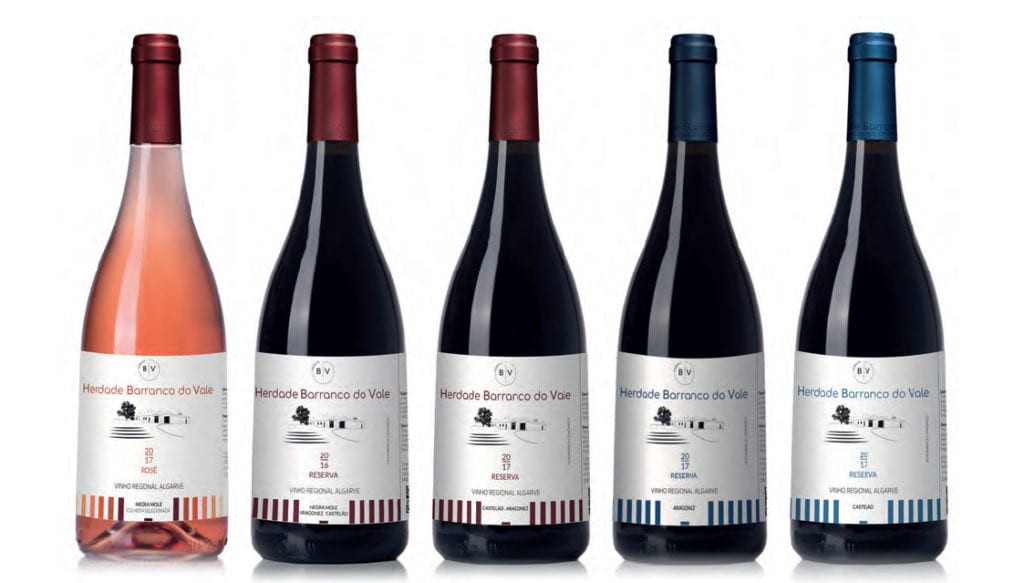 The alchemist in charge is the oenologist João do Ó, from Adega Única (Unique Winery) in Lagoa. Ana is enthusiastic about him and the wine cooperative. “It is indeed unique, and João do Ó seems to be able to read our minds. Although he presses the wines from different wineries, they are all different and are exactly what we want,” she says. Ana herself attended a course with Mário Andrade, a renowned oenologist in the region, and learned a little bit of everything: from working in the vineyards to tasting. “Even if the oenologist can apparently read my mind, I should at least have the knowledge to communicate with him,” she explains with a wink. She describes the characteristics of her wines and talks about the terroir, which in São Bartolomeu de Messines is very different from that of the coast.
The weather this year has been excellent for the vines, and Ana told us that they are protected by the surrounding hills, which give them a sort of microclimate. In 2018, the vineyard produced 25,000 bottles and if all goes well, 2019 should provide 30,000 to 35,000. Year on year, the volume is steadily increasing, and with plans for expansion, it’s only a matter of time before Herdade Barranco do Vale becomes a well-known name in Algarve wine production.
The vineyard also has wine tasting in various locations. From the old winery where Ana’s grandfather used to press his grapes, into the orchards between the vines and at their little wine lounge outside, under the shade of the large tree featured on the label. Visitors are invited to try five wines for €10 and the tasting sessions can be booked by appointment only. 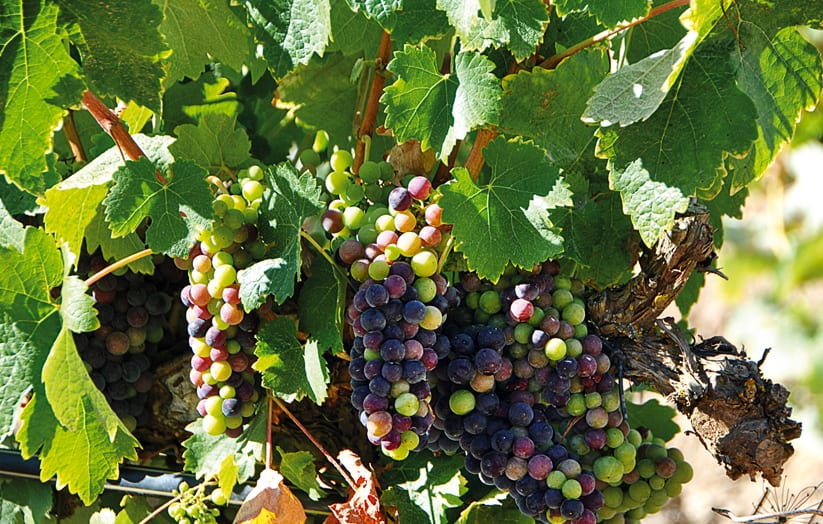 By prior arrangement, Ana will prepare a cheese and ham board to enjoy along with the wines, and we would recommend asking for this as the wines are gastronomic and open up really well with food.
Ana is passionate about her wines and welcomes visitors to tell the story of her family’s journey. Her grandfather’s former house has been renovated into the family’s residence and the tasting room. Further plans include reviving a wine tourism facility, accommodation, a wine cellar and possibly her grandfather’s old medronho distillery. Tour operators are starting to get in touch to bring groups, and the prospect of catering for weddings and events up to 100 people is something that Ana is beginning to look into now. The family welcomes volunteers to experience being a part of the harvesting team.
“It’s a project for a lifetime that my son and hopefully his children will continue to lead in the future,” says the Lisbon woman, whose roots, like those of her vines, are deep in the Algarve.